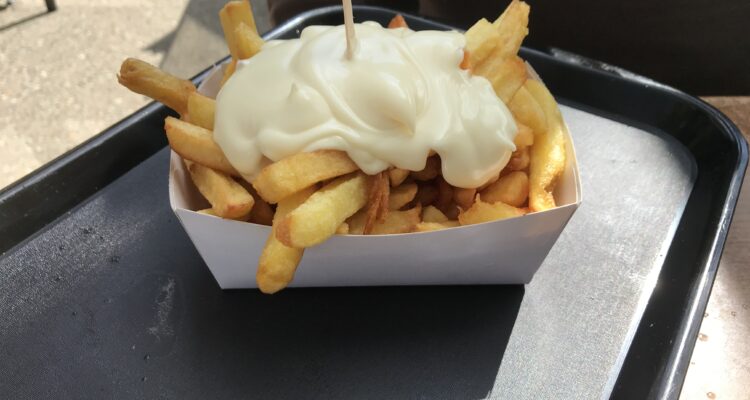 Another blog in the Dutch Traditional Food Series, this time we’ll cover friet. Friet is the Dutch word for fries. Other foods we’ve covered are Muisjes, Hagelslag and Speculaas.

Let’s find out the origins and history of friet. See what it’s made of, how they’re called in the Netherlands, how to eat them the Dutch way and different sizes.

Where fries originated exactly is not known. There are several different stories in which country and how fries came to be. It came into existence somewhere at the end of the 17th century. There’s an ongoing dispute between the French and Belgians about where fries were invented.

It could be that fries were invented in Spain. Teresa of Ávila cut the first potatoes in slices and fried them in a pan with boiling olive oil. There was already a history of frying food in the Mediterranean cuisine and Spain was the first country where the potato came to land from overseas.

In 1775 the first mention of patates frites is in a Parisian book. The French claim the creation of fries, since the first friture would have been on the Pont Neuf.

Belgian historian Jo Gérard has tried to claim that the fries originated in Belgium in 1680. However the potato wasn’t introduced in the region until 1735. Next to that given the economic situation at that moment, the common man wouldn’t use that amount of oil for one dish.

In the 18th century a domestic fried potato existed as a dish. In Paris the modern style of fries was born around 1855. This is the way of preparing fries we know today. Belgians developed the patates frites further, they came up with the practice of deep-frying them twice. First on a lower temperature, after that a second time shortly on a higher temperature.

After gaining in popularity in Belgium, they were introduced in the Netherlands. Beginning with the city of Breda around 1868. From there on the pommes de terre frites spread through the Netherlands. This happened at the end of the 19th century and the beginning of the 20th century. Pommes frites were found more and more in the Netherlands. Belgian fugitives during the First World War helped further spread fries on a large scale with Dutch families.

When in the Netherlands, people will either call it friet or patat. Which of the two they use depends on where they live. Below the rivers a person will likely name it friet, above the rivers a person will likely use patat. It both means the same, and both are derived from patates frites. The French word meaning fries. Friet is derived from the word frite, which means frying. Patat is a synonym for potato.

Potatoes is what fries are made of. They are double deep-fried in frying fat or cooking oil.

Potatoes are peeled and cut in even strips. First the fries are deep-fried in fat or oil in a deep-fryer with a temperature of 145°C/293°F for 5 to 6 minutes. This way the potatoes lose most of their fluid. Before frying them a second time, they have to rest for at least half an hour. The second time deep-frying is in fat or oil with a temperature of 180°C/356°F for 3 to 4 minutes, until they have a nice yellow golden color.

Friet is usually seasoned with salt before serving it.

How do You Eat Friet?

The most common and Dutch way of eating fries is as friet met or patat met. This means fries with mayonnaise. A cone or basket with fries and lots of mayonnaise is the way to eat fries when you visit the Netherlands. You buy it at a snackbar, also called a friettent or patatzaak.

At home most people will eat fries in combination with snacks and sauces. Snacks can be a kroket, kaassouflé, frikandel, mexicano or others. For use at home you can buy fries deep-fried that only need to be fried once. Or you can cut them yourselves from potatoes.

In restaurants fries are usually served as a side dish and/or on the kids menu. A popular kids main meal is fries with chicken and applesauce (friet met kip en appelmoes).

Other popular ways of ordering fries at a snackbar is a friet special or patat special, this is fries with mayonnaise, (curry)ketchup and raw onions. Or a friet met sate (or pindasaus) which are fries with peanut sauce. A patatje oorlog is also popular, although it varies what you will get. It will be fries with either all or a few of these toppings: mayonnaise, curry ketchup, peanut sauce, raw onions, tomato ketchup. A kapsalon has gained in popularity since its invention in 2003. It’s fries loaded with shawarma, melted cheese and salad. Served with garlic sauce and sambal.

Locally there are more ways of serving fries, which all have their own (funny) names.

Different Sizes and Ways of Preparing

Fries size differs. They can be cut really thin, 1.5 mm or thick, 20 mm. Really thin fries will be crunchy crust like tasting, thick ones will also have a bit of a soft potato bite in them.

Fries can nowadays be prepared in several ways. Besides in a deep-fryer or pan with oil, there are fries being sold that are suited for preparing in an oven, microwave or airfryer. These will be less crunchy than deep-fried ones, but will usually be a bit healthier, since less fat or oil is used in preparing them.

There are regional variations on fries, such as raspatat and steppegras. Raspatat is a type of fries made from pressed mashed potatoes. Steppegras is a pile of really thin fries.

That’s All About Friet

When in the Netherlands try a friet met or patat speciaal!