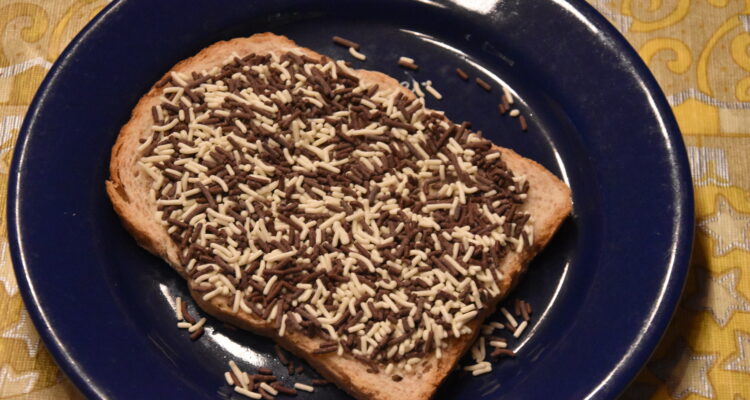 A whole blog about hagelslag! It’s Dutch for chocolate sprinkles and the Dutch eat hagelslag sprinkles year round. It isn’t the first food covered in the Dutch traditional food series, we’ve already talked about Muisjes, Dutch Speculaas and Hete Bliksem.

Let’s find out the origins and history of hagelslag. See what it’s made of, the name explained and how to eat them the Dutch way.

The origins go back to 1907. In the Fall of that year B.E. Dieperink invented white colored sprinkles with anise flavor. He thought that they would be perfect to eat on a slice of bread. Dieperink was the managing director of the firm G. van Voorneveld & Co., which would later turn into Venco. Venco is a famous Dutch drop (licorice) vendor. The company sold the product to pastry chefs and grocery stores. So the first variation of hagelslag was without chocolate. The first advertisement about this product came to life in 1908.

In 1936 the chocolate company Venz started producing chocoladehagelslag, so that people could eat chocolate on their bread. These were rod-shaped sprinkles. This is when the chocolate sprinkles really took off and became a famous sandwich topping. The company created the first machine to produce hagelslag in the shape of tiny cylindrical treats.

So what is hagelslag? It’s a small chocolate candy that is served as a bread topping.

Hagelslag is made with cacao powder, sugar, cacao paste, cacao butter, rapeseed lecithine and Arabian gom. White chocolate hagelslag will be made without cacao powder, but with vanilla essence and rice flour.

Only when the product contains at least 20% cacao powder are you allowed to call it chocoladehagelslag. Below that it’s called cacaofantasie (cacao fantasy).

Hagelslag is called like this, since as the story goes that on the day that E.B. Dieperink invented the product there was hail. Which is not uncommon on a stormy Fall day. Hail translates to hagel in Dutch.

How do You Eat Hagelslag?

It’s eaten on a buttered slice of bread, hagelslag toast. The bread is usually not toasted, but eaten ‘fresh’. It can also be eaten on a bun. The butter is to prevent the chocolate sprinkles from falling off the bread while eating it. It’s usually eaten as breakfast or lunch.

You can buy hagelslag at any grocery store. There’s usually a lot of choice and you can find it in the aisle with other sandwich toppings such as peanut butter, jam and chocolate spread such as Nutella.

That’s All About Hagelslag

So now you know everything there is to know about Dutch chocolate sprinkles.