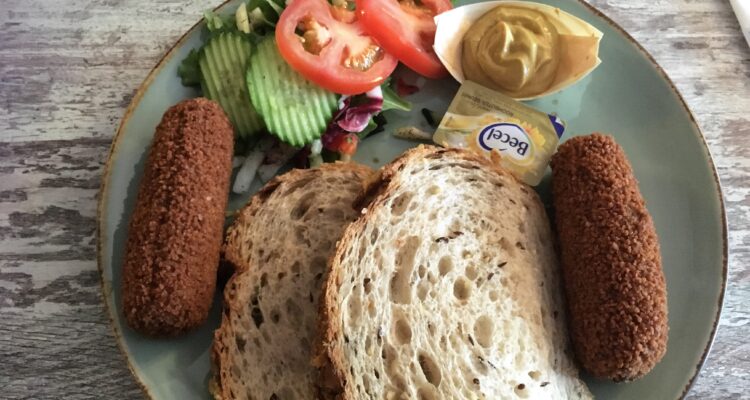 The Dutch have several typical food items. I’m going to write about all of them. Kicking the series off with the kroket. Every time we return in the Netherlands after a road trip, the first thing we get at the gas station is a kroket on a bun. They’re so delicious, it’s not haute cuisine, just a comfort food snack.

In this blog I’m going to write about the history, how it’s made, its origins, the different kroketten that exist and how it is eaten in the Netherlands.

Origins of the kroket

The origins probably lie in France. A recipe for croquets is written down in an 1705 edition, from ‘le cuisinier royal et bourgeois’. Culinair expert Johannes van Dam regards this as the oldest recipe in existence of a kroket. Johannes van Dam was a Dutch kroket expert, famous in the Netherlands.

The oldest Dutch recipes from kroketten date from 1830. In the 19th century people in the Netherlands made meat kroketten and dipped them in fresh bread crumbs, then they cooked them in butter or lard in a frying pan. The purpose of these kroketten was mainly to process meat leftovers.

In the beginning of the 20th century the kroket was a fancy course in an extended menu. After the Second World War the kroket made its transition from fancy intermediate dish to a snack. A long time it was the most popular snack to order in the Netherlands at a snackbar, but in 1996 the ‘frikandel’ took over.

Enough about its history, what’s a kroket made of? Shortly: it is a fried dish, for which a stuffing has been rolled through bread crumbs. In the Netherlands if people refer to a kroket they are  usually talking about a veal or beef meat stuffing.

The longer explanation of how it is prepared, is that it is made of a sort of thick ragout with meat. When cold it’s shaped into a roll and then braided in egg wash, flour and bread crumbs. This is fried in oil, which gives the kroket a crunchy crust. The ragout on the inside is then hot again. The stuffing remains hot for a long time.

How to eat it?

You can eat them just as it is. Just take bites from it, maybe dipping it in mustard (or mayonnaise). Watch out, the inside is hot and can burn your tong or palate. A kroket is also commonly served on a bun, then it’s called a broodje kroket. If the snack is part of dinner, than it’s usually eaten with fries and another snack. A kroket, fries and applesauce is a regular meal on the kidsmenu of restaurants. If the kroketten are served with slices of bread, it’s usually meant as lunch. Such as in week 35 2022, when we had that for lunch.

The McDonald’s franchise in the Netherlands and Belgium serves the McKroket, a hamburgerbun with a flat kroket in the shape of a hamburger with a dijon mustard sauce.

People in the Netherlands eat about a 300 million kroketten a year. That’s about 25 (!) per person.

Over the years I’ve made kroketten at home from scratch, failing once, but succeeding the other times. The shape is usually not so beautiful, but they were well flavored.

Well that kicks of the series about Dutch traditional foods. When you’re in the Netherlands, try out a kroket at a snackbar, it’s typically Dutch! Other typical Dutch foods are kruidnoten, speculaas, Muisjes or stamppot. The next typical Dutch food we’ll will be covering is Split Pea Soup, or Traditional Recipes from Around the World.