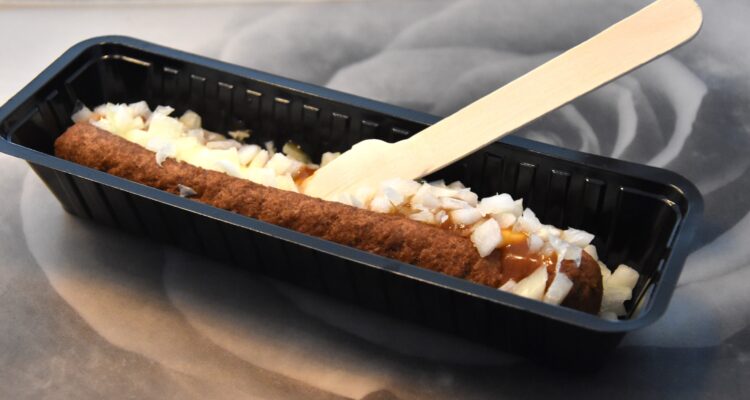 The fifth one in the Dutch Traditional Food Series, and this time all about the most popular Dutch snack, the frikandel! Among the others I’ve covered are the second most popular snack the Kroket, Hagelslag and Vla.

Let’s find out the origins and history of frikandellen. See what’s it made of, how to eat them and which types there are.

In the 16th century the word frikadel is found in the Low Countries (Netherlands, Belgium and the North of France) meaning a (seasoned) ball of ground meat. From the 17th century on the word frikandel is found in cookery books and dictionaries. It was a version without bread crumbs and egg. The ground veal was cooked in a veal net and seasoned with nutmeg, mace, salt and pepper. In 1824 in a book written by P. Weiland frikandellen is used meaning small sausages made from veal, white bread and seasoning, which is prepared in butter.

The rise of the modern frikandel started in the 1950s. In 1954 Gerrit de Vries was selling many meatballs in Dordrecht. Due to changes in the law he wasn’t allowed to sell it as a meatball anymore. He turned his meatball into a sausage shape, without changing the ingredients. De Vries called it the frikadel, after the German frikadelle.

In 1958 Jan Bekkers in Deurne replaced the ground meat with really fine grounded meat. He was inspired by the USA, with the snack culture that was on the rise there. He made a smooth sausage and named it the frikandel. In 1959 Jan Bekkers founded the Beckers factory. This recipe is what became the famous frikandel we know today.

Until 2005 the word frikadel was the official spelling in the Netherlands, from 2005 on however frikandel is the correct spelling.

In Belgium frikandel sometimes also means you get a meatball. Belgium has several names for a frikandel, it can also be called a frikadel, fricandelle, fricadelle or curryworst depending on in which area you are.

A frikandel is made from a mixture of meat, namely mechanically separated chicken (40%) and pork (25%). Some manufacturers add in horse meat (5%). The rest is water, bread crumbs, thickener, herbs and spices, onion and flavor enhancers.

Frikandellen produced in the US contain pork (50%), beef (35%) and non-mechanically separated chicken (15%).

The meat is shaped into a long, dark-colored, cylindrical, skinless, chewy, sausage like product, which is deep-fried.

It got a bad reputation since there’s an urban legend that there would be cow’s eyes, offal, udders, bones or carton in it. This isn’t the case.

The frikandel is a highly sustainable product, since it uses mechanically separated chicken, it’s a good example of using every part of an animal. It could very well be the most sustainable snack on Earth.

How do You Eat a Frikandel?

The frikandel speciaal is the most popular way of eating the dish. The frikandel is cut lengthwise (a deep cut) and stuffed/topped with mayonnaise, curry ketchup and chopped raw onion.

Frikandellen are also eaten only with sauce, several sauces are popular: mayonnaise, tomato ketchup, peanut sauce or curry ketchup. The sausage can also be served on a (soft) bun or with fries on the side. If there’s 2 with fries in the middle, it’s called a catamaran.

It can also be included in party snacks, then they’re roughly 1/3 of the regular size and served with other Dutch snacks. You can also get a frikandelbroodje. Then the sausage is wrapped in puff pastry with curry ketchup.

You buy them at a snackbar or from an automatiek (automat). They’re usually not available at restaurants, with the exception of being as part of a kids menu.

There’s a halalfrikandel, which consists of chicken (80%) and zero pork. There are also vegetarian frikandellen made with only organic ingredients. Then there’s the Frikandel XXL, which is simply a larger variation of the regular one. A fun variation is the loempidel, fort his one the sausage is wrapped in a lumpia coat.

There are also a lot of local variations on the frikandel speciaal. Pierre Wind has come up with the pestofrikandel, it’s with pesto mayonnaise, pine nuts and Parmesan cheese. Popular in Nijmegen is the discodel, with mayonnaise and colored sprinkles (named discodip in the Netherlands).

There are even frikandel-eating contests. The record was set in 2005 with 47 frikandellen eaten by one person in an hour.

There’s even a day for the snack. February 4th is National Frikandellen Day.

That’s All About the Frikandel

When you’re in the Netherlands try this popular Dutch snack.