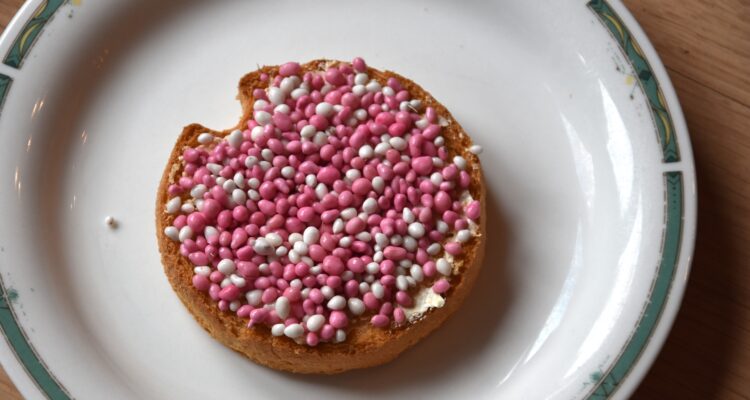 This time we’re reviewing muisjes in the Dutch Traditional Food Series. Muisjes translates as little mice. Other foods we’ve covered in this series are the Frikandel, Vla and Kerststol.

Let’s find out the origins and history of muisjes. See what it’s made of, how to eat them and in which colors you can get them.

In the 16th century it was common to eat anise and other food items dipped in sugar, among French royalty and the rich upper class. It was coated in sugar so that they could better digest it. The food was either confided or covered with a hard layer of sugar. Among the foods used for this, besides anise, were pistachios, fennel or cinnamon.

In the 17th century it became tradition in the Netherlands to give kraamanijs (crushed anise seeds) to woman who had just been in labor. It was believed that anise helped the uterus get back in shape and that it would stimulate lactation and thicken the mother’s milk. Since something also had to be given to the visitors, they added some seasoning to the anise and gave this as a treat. It was supposed to be a gift from the newborn child.

In the 18th century the tradition started to eat beschuit (rusk) with a thick layer of sugar. In parts of the provinces of Gelderland, Noord-Brabant and Zuid-Holland the rusk was later on eaten with sugar coated anise seeds. Since rusk was quite expensive, most people just had sugary white bread. Rusk was something eaten by the wealthy. Until rusk became cheaper later on.

In 1860 Cornelis Rutgerus De Ruijter starts a pastry shop in Baarn. He has learned the trade, including how to make muisjes, in Utrecht. The muisjes were eaten on rusk when a child was born. The muisjes of De Ruijter were just as popular as his pastries. He sold pink and white little mice.

Some older ladies found the muisjes too hard for their teeth. So they crushed them to powder with a mortar. These became the famous Gestampte Muisjes (crushed little mice).

The son of Cornelis, Piet, continued the pastry shop after his father’s death. It was such a success he was named purveyor to the court.

In 1938 the tradition of eating beschuit met muisjes was given a boost and became internationally known. Cees and Piet De Ruijter offered orange and white muisjes to the Dutch Royal family at the birth of Princes Beatrix on January 31st 1938. The color of the Dutch Roayal family is orange.

Where the name Muisjes comes from is disputed between historians. A theory is that it derives it name from the shape of the anise seed. It’s oval shape and that it has a tail, resembles a mouse. But it could also come from the fact that a mouse used to be a symbol of fertility.

The name Muisjes is a registered trademark of Royal De Ruijter BV. De Ruijter is a Dutch food processing company, which sells bread toppings such as hagelslag, vlokken, vruchtenhagel and muisjes. In 2001 the company was acquired by Heinz.

Anise seeds are first being sieved. Then all the anise seeds go into big, round, copper kettles. They turn round and the seeds are being sprayed with sugar water. The water vaporizes due to the high heat and only the sugar remains on the seeds. This process is repeated several times. At the end the seeds have a thick sugar coat. Then the seeds get a color and are made shiny. Then the seeds need to dry for 36 hours.

Sugar water contains sugar, glucose syrup and powdered sugar. Carnauba wax is used to make them shine. Carminic acid is used for the pink coloring of the mice, and indigotine for the blue coloring. This makes the blue ones vegan, the pink ones are not vegan, because of the carminic acid.

How do You Eat Muisjes?

It’s traditionally eaten as beschuit met muisjes. This is eaten this way after the birth of a baby. It’s served to visitors who come to admire the baby, older siblings will bring it to school to serve their classmates or parents share it with colleagues at work.

Gestampte muisjes are also eaten on rusk, just not after the birth of a child.

The crushed ones as well  as the pink or blue ones are a bread topping and are eaten at slices of white or whole wheat bread. As such it will serve as breakfast or lunch. The rusk or bread is buttered and then the muisjes are sprinkled on top. When you need to top a lot of beschuiten, you dip the buttered rusk in a bowl with muisjes. This way they’re spread more evenly.

Orange and white muisjes are sometimes sold, in honor of the Royal family.

Olaf Ouwerkerk has introduced other colors, the seeds are in the colors of a city (red/white for Utrecht, green/white for Rotterdam). These are called Stadsgenootjes (city pals), since the name Muisjes is a licensed trade mark.

That’s All About Muisjes

When in the Netherlands try some Beschuit met Muisjes.