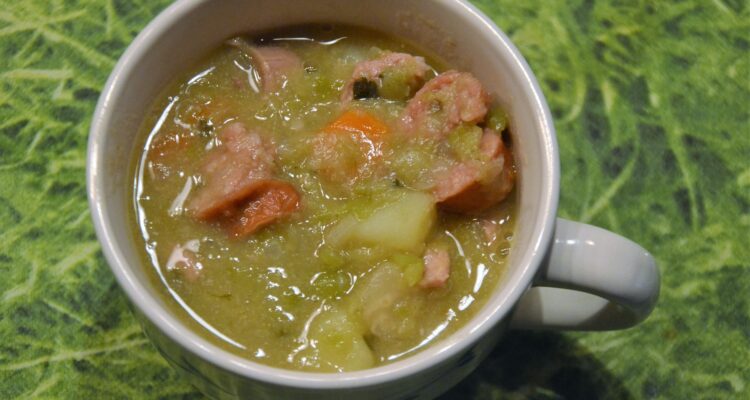 After talking about the kroket last month, now I will tell you about another traditional Dutch food: erwtensoep or snert (Split Pea Soup). We usually have this a couple of times during the winter period.

In this blog I’m going to cover the history of erwtensoep, how it’s made and how and when snert is eaten in the Netherlands.

The origins of soup made from peas goes all the way back to the Greek civilization. It’s known that pea soup was already prepared in 500 BC. But historians suspect that centuries before that, the soup was already known in the Middle East.

The first known Dutch recipe is from the 16th century.

It’s is a soup made with split peas. The base is either a meat broth or water with split peas. What else is added to the soup varieties? In some traditional recipes this is just celeriac and leek. In others it’s carrot and onion. Further can be added potatoes, celery and leaf celery. In the meat section usually spareribs, pork loin, smoked sausage, pigs leg or pork chop. The soup should be thick enough for a spoon to be able to stand up straight in it.

How do you eat erwtensoep?

In the Netherlands erwtensoep is comfort food for the colder months. The Dutch name is either erwtensoep or snert. It’s eaten in a bowl with ryebread on the side. The ryebread either has katenspek (raw bacon) or cheese on it. It can either be eaten as a lunch or dinner. When served as dinner it’s common to serve krentenbollen (currant buns) on the side.

On ice skating rinks or when ponds are frozen over, snert is usually sold in paper cups. It’s perfect for warming up on a cold day.

There’s not just one single version of the soup. There are also vegetarian versions and versions for the slow cooker. It’s made with ingredients that have an expiry date far into the future. So does Split Pea Soup, when stored properly. It can also be frozen and kept in the freezer.

In winter erwtensoep is available at lots of different restaurants (among them Het Oude Tolhuys) and shops. As you notice I’ve tried out different snert recipes over the years, other dishes I’ve tried out many recipes from is mayonnaise. Other typical Dutch foods are stamppot, frikandel, Muisjes and kruidnoten, next month we’ll talk about kibbeling. This blog was really popular in 2022.