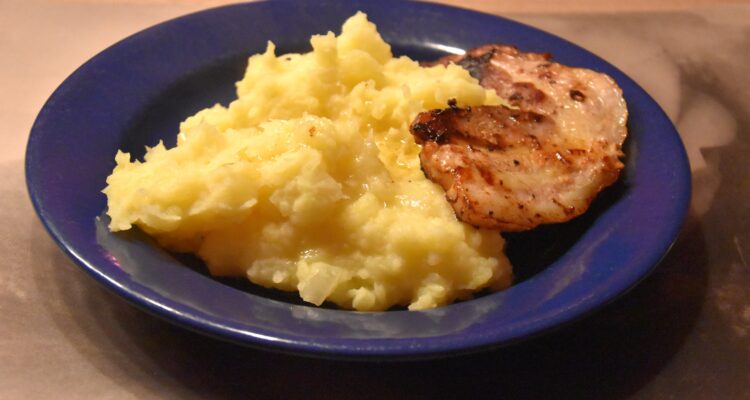 The next blog in the Dutch Traditional Food Series, this time about hete bliksem. Other foods I’ve covered are Friet, Muisjes and the Frikandel.

Let’s find out the origins and history of hete bliksem. The name explained and the different names around.See what it’s made of, how to eat them the Dutch way.

Hete bliksem is a stamppot which goes back years. Origins of the dish are unsure. It either originated on the Veluwe in the Netherlands, in Germany or in the province of Limburg in the Netherlands and Belgium.

A theory is that the dish originated on the Veluwe with the farmers. They wanted to use the ugly, not sellable apples, and made this dish with it. The flavor of the apples was still good, however they didn’t look beautiful anymore, so couldn’t be sold.

Another theory is that the recipe dates from the period that potatoes were introduced in Limburg. It was a way to combine a new product with a domestic product.

Hete bliksem means hot lightning. It probably got this name since the apples and with this the whole dish, remains hot for a long time. The apples or pears contain a lot of fluid which keeps it hot a long time. So hot you could burn your tong or palate on it.

The dish contains potatoes, apples or pears and onion. The division is half potatoes, ¼ apples and ¼ onion. You prepare mashed potatoes and applesauce. Boil the onions. Mix everything and season with pepper and salt.

It’s an easy stamppot with not a lot of ingredients. However it’s a nutritious meal.

How do You Eat Hete Bliksem?

Hete bliksem is a stamppot that’s eaten as dinner, mostly in the Winter months when the weather is colder. It can be served with blood sausage, bratwurst, bacon or a slice of pork belly.

It’s not often sold in restaurants in the Netherlands. It’s a bit of a forgotten dish.

That’s All About Hete Bliksem

So now you know everything there is to know about this old Dutch dish.