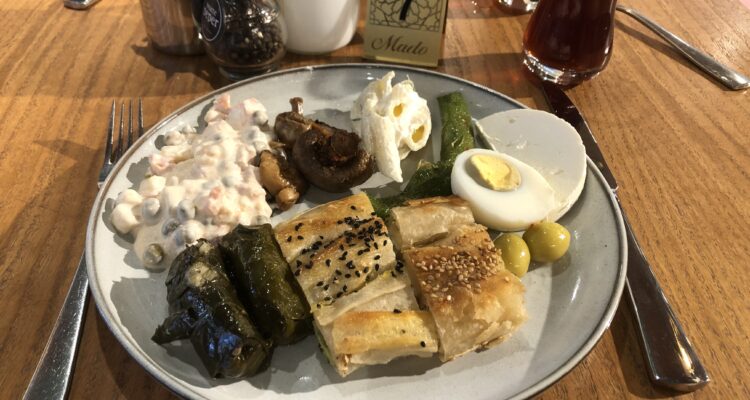 Yuri’s May break was officially over in week 19 2022. He had practice for the school musical almost every day. They’re performing the musical on school in July. Our week had a less happy ending on Sunday.

Dinner consisted of two dishes, soufflés with cheese and Spring lumpia’s. Both were delicious. The soufflés are from the cookbook Ovenbijbel and the lumpia’s from the magazine Boodschappen.

Another recipe from the cookbook Ovenbijbel for dinner this week, namely a vegetable lasagna. Paul made us a limoncello spritz in the evening. I made the Apple Butter Cheesecake from I am Baker and placed it in the fridge.

The Apple Butter Cheesecake was simply delicious, we had a piece of cake for breakfast. Dinner was spaghetti with vegetarian ground meat that Yuri prepared from the cookbook Snufje zout & snufje geluk. He loves spaghetti with red sauce, and he’s made this recipe before.

Paul prepared us a whole ham with honey-mustard sauce from the cookbook Ovenbijbel. He served it with small potatoes and stir fried vegetables. The ham was really well done and delicious.

For lunch I made us hotdogs with pickled cucumbers and chutney. In the afternoon we biked to Landwinkel Nieuw Slagmaat. We bought white asparagus, mushrooms, cherry tomatoes and vanilla vla here. Friends came over for dinner and I prepared mashed potatoes, fried mushrooms, a poached egg, pesto sauce and roasted asparagus and tomatoes.

We had to shop for new clothes for Yuri’s upcoming confirmation. We had the lunch buffet at Mado. A Turkish restaurant, it was delicious, they have a breakfast & lunch buffet till 2pm. For dinner I made a mushroomburger with pickled cucumbers and chutney.

We had planned a day at the Warmuseum Overloon for Militracks. However when we came to our car in the morning, someone had broken into it. The car was charging at the end of our street, we have a fully electrical car. The back window was busted in, they had searched the car and found nothing. The rest of the morning was spent handling this.

In the afternoon I went to the city center and walked around. Bought an iced tea at Dunkin Donuts for myself. Brought home two milkshakes from Five Guys for Paul and Yuri. For dinner I prepared vegetarian chicken in yogurt sauce with lemon and dill.

So our week didn’t end in a great way, but it will all be alright.