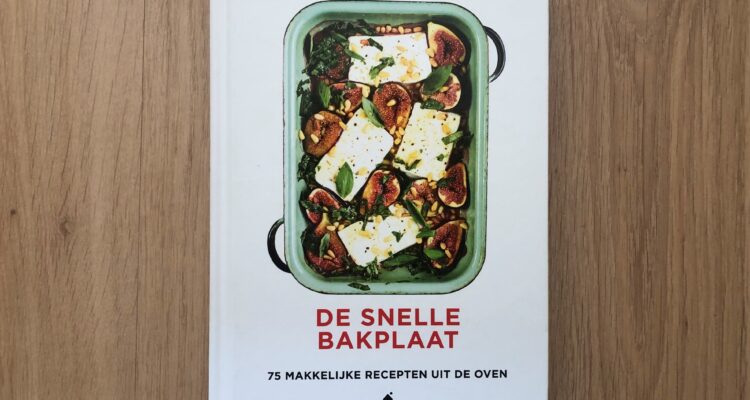 The second cookbook review on the site is again one with oven recipes. This time it’s The Quick Roasting Tin Review, a book I got from a friend in 2020. Just like Ovenbijbel, it contains oven recipes that are easy to prepare. It’s all about traybakes which only require 30 or less minutes in the oven. Preparation time should only be 10 minutes.

The author and chef behind the cookbook is Rukmini Iyer. She’s a foodstylist and recipe writer living in London. She has already published several cookbooks and has her own website, where she promotes her books. There are also some recipe video’s and recipes on the website. Her cookbooks are popular and she’s sold over 1 million copies. Rukmini and her books are known for creating simple, yet tasteful recipes.

Square Peg, Penguin Random House, Uk is the original publisher. I have the Dutch version, which is titled De Snelle Bakplaat. Publisher of the Dutch book is Becht. ISBN-number of the book is 978 90 230 1627 4. It’s a hardcover version.

The Quick Roasting Tin was Rukmini’s 3rd book. So far she has published 5 books, 4 in the tin-series and one with recipes not suited for the oven. The first book in 2017 was The Roasting Tin. Then in 2018 The Green Roasting Tin with only vegan and vegetarian dishes. This was followed in 2019 with the book I’m reviewing right now. The Roasting Tin Around the World followed in 2020. In 2021 she published The Green Barbecue, the only non-tin cookbook so far. The last cookbook has been The Sweet Roasting Tin in 2022. Which I have in Dutch and the Banoffee Chocolate Tartlets are from that cookbook.

The book has 430 pages and is originally written in English. All the recipes come with a photo. All photos are of the finished dish and are perfectly styled, which doesn’t come as a surprise since Rukmini is a foodstylist. I love it that each recipe has a picture. A photo and the title are what get me interested in a recipe.

The cookbook has 7 chapters with recipes. The chapters are as follows: Worknight Dinners, Family Favourites, Make Ahead Lunchboxes, Date Night, Feed A Crowd, Weekend Cooking and Sweets. Each chapter starts with a one sentence introduction and the recipes it contains.

Further there’s an introduction and a small chapter on serving at the end.

There are 75 recipes in total in the cookbook. Each recipe fits on one page and there’s a separate page for the photo. Each recipe has the title printed large, underneath that is a short intro to the recipe. The ingredients list and preparation time are under the intro on the left. To the right of the ingredients are the instructions. Some recipes contain a tip on the bottom of the instructions.

The recipes are simple to prepare, healthy and are one pot dinners (or in this instance one tin).

What I’ve Prepared and My Experience

So far I’ve prepared 9 recipes, from Savory Pie with Sage & Wild Mushrooms to Dal with Nigella & Tomatoes. The first recipe I tried out was Quiche with Broccoli, Gruyère & Parmaham, which is a favorite.

Our all-time favorite recipe so far is the Pancake Breakfast with Forest Fruits & Lemon Butter. Other recipes we loved are the Savory Breakfast Pie with Pancetta, Eggs & Green Asparagus and Creamy Gnocchi Recipe with Dolcelatte, Figs and Hazelnuts. When I prepare the Pizza with Meatballs, Cherrytomatoes & Mozzarella again, I will bake the meatballs first before placing them on the pizza. They gave off a lot of fluid this way.

That’s All On The Quick Roasting Tin Review

Hope you’re as enthusiastic on this cookbook as I am. I’ve already scheduled some more recipes for the next weeks, some recipes like the pizza are on the menu again and some new ones.