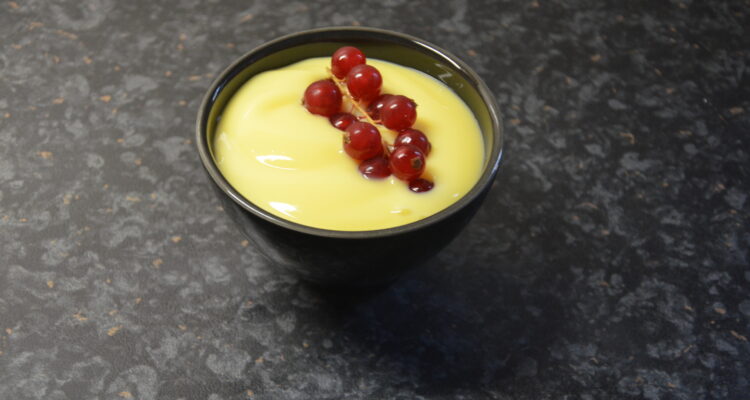 The fourth one in the series, this time all about vla. We’ve covered the kroket, split pea soup and kerststol in the Dutch Traditional Food Series. It’s a dessert and is eaten all year long. Another one in the series is Hete Bliksem.

Let’s find out the origins and history of vla. See what’s in it, the difference with custard and pudding, how we eat it and which flavors there are.

Vlade went from vlae to vlaai in Limburg (a province in the South of the Netherlands), in this case meaning a pie. The pie was stuffed with fruit (compote) or a dairy product. In the West of the Netherlands this dairy stuffing was also eaten separately from the pie and was called vla.

Vla is sold in cartons nowadays, but originally it was sold in glass bottles. Due to the consistency of dessert, getting it all out of the bottle was difficult. For this a flessenlikker (a special bottle scraper) was invented. Almost every Dutch household has this item, because despite it being sold in cartons, it still doesn’t come out completely.

Vla has been around as a cold dessert in the Netherlands since the 18th century. The dessert is also eaten in Suriname in South America. In 1970 Daniel Carasso designed a more creamy variation for the French consumer market. He created the Danette, which is being sold in France and Belgium. In the 2000’s the Dutch dessert also has been introduced in Germany and Wallonia (the French part of Belgium).

Vla is traditionally made with fresh cow’s milk, eggs and sugar. It has the consistency of yogurt. Later on cornstarch or custard powder was also used to get the right consistency. It has to contain at least 50% cow’s milk, has to have starch and the milk fat content has to be at least 2.6% to be called vla. The milk is boiled and either eggs, cornstarch and vanilla is added or custard.

So is there a difference between the three? And if so what is the difference? Custard is the English translation of the word. It’s also a dairy product made from boiling milk with eggs added. Pudding is also made from milk, however it has a thicker consistency. Something like gelatine will be added to pudding. Pudding has a solid shape unlike vla.

However what makes it a bit confusing is that since in the province of Limburg the word vla is associated with vlaai, they call it pudding. In the province of Noord-Brabant and in Flanders they also use the word pudding.

How do You Eat Vla?

Vla is served in a bowl and eaten with a spoon as a dessert. It can be topped with things such as whipped cream, syrup, cereal, granola, fruit, apple sauce, bitterkoekjes (macaroons), (fruit)hagelslag or many other foods. A popular combination is vanilla flavor with red currants.

The dessert isn’t really sold in restaurants, it’s something you eat at home. You buy it at the grocery store. However one variation, a vlaflip, can sometimes be found at restaurants. It’s red syrup, vanilla vla and yogurt layered in a tall glass.

Traditionally vla was vanilla flavored, and to this day vanilla is the most popular flavor. It however comes in many flavors and more are added each year.

Other flavors are chocolate, caramel, peach, strawberry, banana, hopjes (coffee flavor), bitterkoekjes (macaroons) and so on. There’s also dubbelvla, a combination of two different flavors in one carton. Think chocolate and vanilla, vanilla and raspberry or vanilla and caramel. It can also contain chunks of fruit, chocolate balls, nuts and so on. An example is straciatella vla. There’s also luchtige vla, which is more fluffy. There are also seasonal flavors such as oranjevla (available around Kingsday). Flavors perfect for the season, such as apple and cinnamon in the Fall.

That’s All About Vla

It’s a delicious dessert. So when you’re in the Netherlands, buy a carton in the grocery store and enjoy.