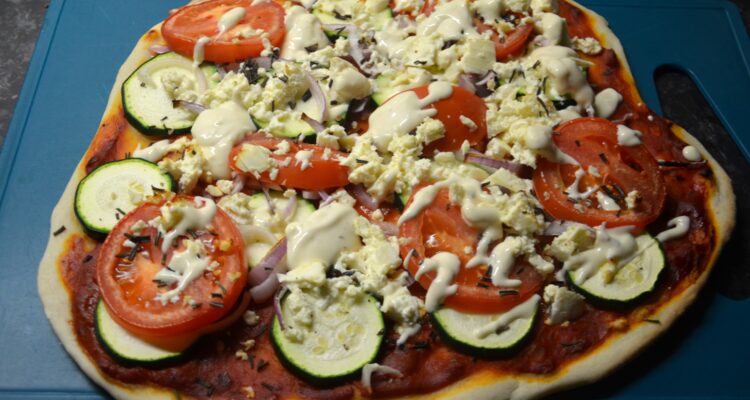 Pizza is a favorite meal for my son, he simply loves it. There was a time that we had a different homemade pizza each week. This Greek pizza was one of them. We loved this Greek salad pizza! Homemade from the crust to the sauce and topped with veggies.

This recipe for Greek pizza is topped with pizza sauce, zucchini, red onion, tomatoes, feta cheese, rosemary and pepper. Just before serving you’ll drizzle some garlic sauce over it and you have a delicious veggie packed pizza for the whole family. The recipe is from the magazine Lekker Eten & Bewegen from C1000 (C1000 used to be a grocery store chain). The recipe for homemade pizza dough and sauce, I will provide later on. They aren’t part of this recipe, so use your own favorite pizza dough and pizza tomato sauce.

Other pizza recipes on the blog are the Cheeseburger Stuffed Pizza, Oatmealpizza with Grilled Eggplant and Anchovy and a Hawaiian Pizza.

Tweaked the recipe a bit. I made my own crust from scratch, as well as the pizza sauce. In the recipe they use a store bought pizza sauce and a package to make pizza dough. I used two instead of 3 tomatoes and two tablespoons of garlic sauce instead of 4. I omitted the salt, I only added pepper.

Further I made only 2 pizza crusts instead of 4 from the pizza dough. I didn’t shape a rim on the pizza’s.

Divide the pizza dough in two. Roll both pieces out in large circles. Place them each on a baking sheet. Top both with pizza sauce. A large dollop of sauce in the middle and with a spoon cover the whole pizza with the sauce. Let the rims free.

Layer with zucchini, onion and tomato. Crumble the feta over the veggies. Sprinkle rosemary and pepper on the pizza.

Drizzle with garlic sauce and serve.