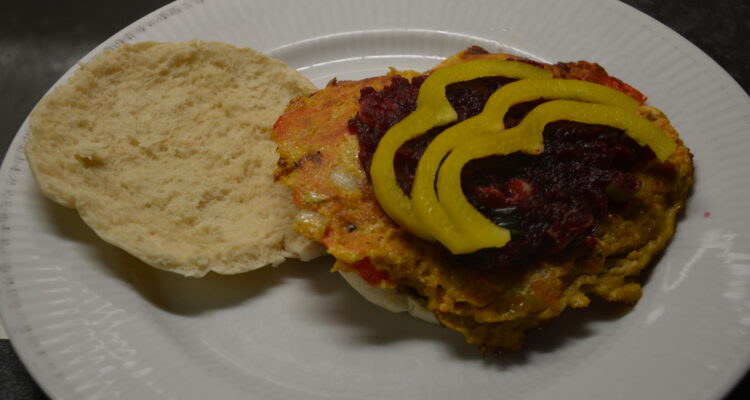 On Saturday morning we usually have breakfast centered around eggs. It could be just a baked egg on bread, or something that requires a bit more work. Well this time Paul made us a veggie burger omelet. It was delicious.

The recipe comes from the cookbook ‘Heerlijke Hamburgers’ from Anne Wilson, a chef of which I have several cookbooks with lots of awesome recipes. This was another great recipe.

A great combination, the pita bread with the omelet and veggies. Paul used regular vinegar instead of rice vinegar, we used less soy sauce and only had a yellow bell pepper for garnish. The burgers did fall apart a bit, but were still flavorfull.

If you’re looking for a smoothie to go with this breakfast, check out the Healthy Sinterklaas Smoothie, if you need a comfort food dinner than head over to the Red Beets Endivie Stamppot. When you’re just in the mood for something with chocolate than search no further than these Oreo Stuffed Chocolate Chip Cookies. If you want to serve it as dinner, broccoli with coconut is perfect as a side dish. And for a different egg recipe, check out the Scrambled Egg Bun or the Chicory with Egg Mimosa.

Make 4 patties from the egg-veggie mixture. Cook these in 1/8 cup peanut oil. 2 Minutes on each side.

Toast pita breads in a toaster. Place an omelet/burger on each pita bread. Top with red beets and some yellow bell pepper.