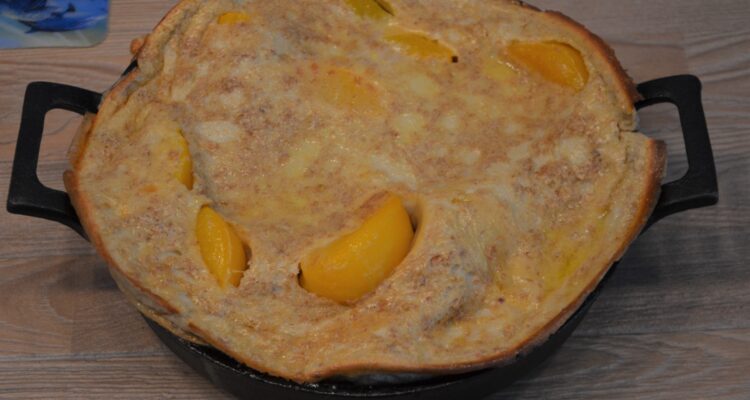 The story with this Peach Dutch Baby is that when I had just put the first batch in the oven, I saw someone breaking into our car. It was strange and I had to look twice, to assure myself that he had stepped into our car. Paul caught him and I called the police. Luckily there was no damage to our car and nothing was taken. But our first batch of the Peach Dutch Baby pancake we ate cold. The second batch was warm however.

The recipe was easy to follow. I just had to google how much 400 Fahrenheit is in Celsius, since my oven doesn’t calculate in Fahrenheit here in Europe. Instead of fresh ones I used canned peaches. I made it in 2 batches, since my cast iron skillet wasn’t large enough for everything at once. The pancakes are delicious.

Comment below if you’re going to try it out, if you have any questions and tag #cosetteiscookin when you’re sharing pics of it on your socials.

Microwave 1.5 tbsp butter for 20 seconds. In a bowl mix melted butter, eggs, milk and vanilla extract until combined. Then add the flour, 1 tbsp of the sugar, ½ tsp ground cinnamon, baking powder and salt.

Place the cast iron skillet in a preheated 200°C/400°F over for 20 minutes until golden and puffy. Serve and repeat with the remaining ingredients.