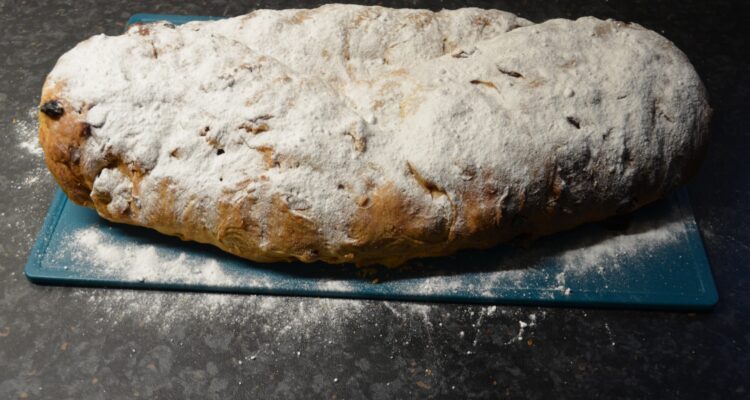 Kerststol or Kerstbrood or Christmasbread is a truly traditional Christmas food in the Netherlands. Paul loves it, I’m less fond of it, since I don’t like almond spice that much. Which according to my husband is the highlight of a kerststol recipe. You can buy them everywhere in stores around Christmas time. But you can also prepare them yourselves, and that is the best.

The kerststol recept (recipe) I used is from the cookbook Het Zoetboek from Delicious. I already wrote about it on the Cosette is Cookin’ Facebook page on December 18th 2019. Bread dough made with flour, milk, sugar, yeast, cardamom, cinnamon, milk powder, an egg, salt and butter. I mixed almonds, raisins and succade soaked in rum through the dough. For the almond spice you need almonds, sugar and an egg. The dough gets wrapped around the almond spice. After baking it’s sprinkled with powdered sugar. It’s served in slices with cream butter.

Followed the instructions completely, they were clear and good. I soaked the raisins, almonds and succade for 2 days instead of just overnight. My oven was on 180° Celsius, because we don’t have a 175° Celsius setting.

Mix succade, raisins and almonds and soak in rum for 2 days. Stir it once and a while. Drain it and leave for a while.

In a bowl add flour, yeast, salt, cardamom, cinnamon, milk powder and sugar. Mix well, than add the egg, milk and 150 grams of the butter. Mix with dough hooks until you have a smooth dough. Sprinkle a bit of flower over it and cover with a kitchen towel. Let it rise for about a half hour, until it has doubled.

Knead the dough for 5 minutes by hand. Roll out in a round flat piece. Top with the almonds, succade and raisins. Roll up the dough and knead well, until it’s mixed well. Roll out the dough in a square of 30 by 25 centimeters. Fold the dough about ¾ over the other side.

Grind the almonds, sugar and egg in a food processor until it’s the consistency of almond spice. Roll the spice into a 25 centimeter roll. Place the roll on the dough and wrap the dough around it.

Cover the dough with sunflower oil. Place it already on the baking tray. Cover with a kitchen towel and let proof for an hour.

Bake in a preheated 180°C/365°F oven for an hour. Just before the end drip with melted butter (the leftover 50 grams). Before serving sprinkle with powdered sugar.