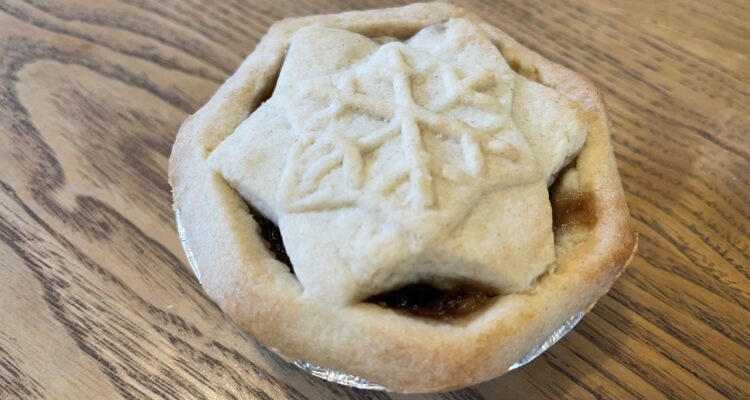 Around Christmas each country has its own traditions. This is especially so when we’re talking about Christmas food. Christmas food around the world varies a lot as you can see in this post. We’ve got kerststol, but also prawns. I’ve asked my fellow bloggers about their favorite Christmas food dished and they’ve come up with some delicious ones.

Christmas Food Around the World

So here are 4 Christmas recipes from around the world, two from Australia, one from England and one from the Netherlands.

Contributed by Cosette from Cosette is Cookin’.

A kerststol is a luxurious bread that’s served at Christmas breakfast or Christmas brunch. It’s one of the Christmas food traditions in the Netherlands and it is delicious.

It’s a white flour bread dough with raisins through it. Candied fruit, almonds and hazelnuts are also added most of the time. The dough is wrapped around almond spice. After baking the bread it’s sprinkled with powdered sugar.

The kerststol is eaten in slices with cream butter smeared on it. It’s not a food eaten only in the Netherlands, as it originated in Germany, it’s also eaten there for Christmas. Nowadays there’s also a paasstol (Easter) and pinksterstol (Pentecost), the same bread just named differently for the occasion.

The combination of the almond spice with the rich bread is perfect. Try it out when you’re in the Netherlands around Christmas time.

Contributed by Jenni from Choose Veganism.

Mince pies are a traditional Christmas treat originating from England. When mince pies were first served in the Middle Ages, they were filled with minced meat, typically mutton. However, modern mince pies are suitable for vegetarians as the ‘mincemeat’ filling is made with fruit and spices, rather than meat.

According to traditional customs, you’re meant to eat a mince pie every day from Christmas until the Twelfth Night (5th January) if you wish to have happiness for the next year. Nowadays, people often start eating mince pies once they become available to buy in November or December and have had enough of them by Christmas!

Mince pies are much-loved because they can be served warm or cold, at any time of the day, either as a snack or a sweet treat after a meal.

Pavlova is a typical Australian dessert that is especially popular over summer Christmas time.

Affectionately shortened to ‘pav’, this simple, fresh dessert is one of the foods most commonly associated with Australian cuisine.

Named in the 1920s to celebrate the Australian and New Zealand tour of Russian ballerina Anna Pavlova, the pav has been an ongoing source of tension between the two countries which both lay claim to the recipe.

The desert is essentially a meringue with a fruit topping. It is usually served chilled, perfect to enjoy in the hot Australian summer.

To create the Pavlova, egg whites are beaten to a stiff consistency and slow-baked to create a crunchy outer shell and soft, marshmallow-like center. The meringue is topped with whipped cream and summer fruits. Popular fruits include strawberries, kiwi fruit, passionfruit, and mango.

Hot southern-hemisphere Christmases mean fresh flavors and cool dishes and a heaving, colorful pavlova very often takes pride of place in the middle of the table of Christmas Day.

Contributed by Ingrid from Christmas Time Made Easy.

In Australia Christmas occurs in the middle of our Summer when temperatures can be extremely hot. As a result fresh prawns are a popular tradition for Christmas lunch.

We don’t however “throw another shrimp on the barbie” as this would add to the heat but instead we buy the prawns ready cooked by the kilo, peel them at the table and then eat them with seafood sauce. Simply, refreshing and delicious!

The Sydney Seafood Markets are open for 36 hours straight in the lead up to Christmas enabling everyone in Sydney to buy their prawns for Christmas.

According to the Australia Prawns Farmers Association a massive 6 million kilograms of prawns are sold in Australia during the Christmas season.

Another really Australian thing for Christmas are Christmas Hampers.

Finland, the home of Santa Claus, has some of the most unique and fantastic Christmas dishes. The main dish is usually a large Christmas ham, but Joulupöytä (the traditional assortment of foods served during Christmas) contains much more. One of these dishes is the casserole trio.

The casserole trio, including the carrot casserole, the potato casserole, and the rutabaga casserole, is the most traditional Christmas dish, after the Christmas ham, in Finland. You can make the casseroles yourself or buy them from the store.

Hope this has given you some inspiration on what to prepare for Christmas. For now 4 dishes but will be adding more later on. When looking for another perfect recipe this Christmas, then try out Brioche with Seeds and Candied Orange. For more Traditional Recipes from Around the World there’s this whole other post.