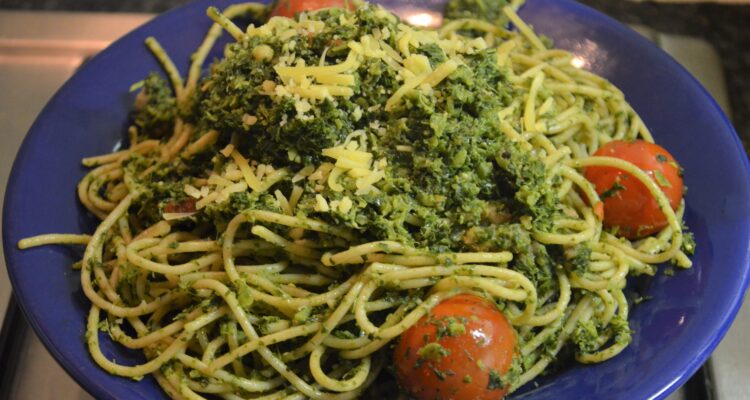 Each week I cook a recipe from the same cookbook, I just follow the book page by page. Bacon and kale pasta was one of the last recipes I tried out from the cookbook ’50 gerechten van toen met de smaak van nu’ from Emte. Emte was a supermarket chain, which has been taken over since this cookbook was published.

This recipe is a healthy pasta dish. It uses whole wheat pasta with kalesauce and bacon. So enough fibers and veggies, but the dish doesn’t lack flavor. If you want it meatless, just omit the bacon.

An easy recipe to make. I’ve made it 3 times so far. Once with endivie, since it was the wrong season for kale. Once with kale, but without the bacon and once with the bacon. The endivie one is number one, second is the bacon kale pasta. The recipe instructions are easy to follow.

Place the small tomatoes in a roasting tray. Sprinkle oregano, 2 tablespoons olive oil and one pressed clove of garlic over the tomatoes. Place the tomatoes under the broiler in a 250°C oven and roast until the tomatoes are starting to blacken. Fry the bacon and drain it on paper.

In the meantime boil the kale with 450 ml of water for 15 minutes. In the same time boil the pasta according to package instructions. Drain both the kale and the pasta. Purate the kale with 70 ml of olive oil, one pressed clove of garlic, red pepper, pine nuts, 30 grams cheese and zest from one lemon. Add the sauce and bacon to the pasta and mix. Serve topped with the tomatoes and some grated cheese.