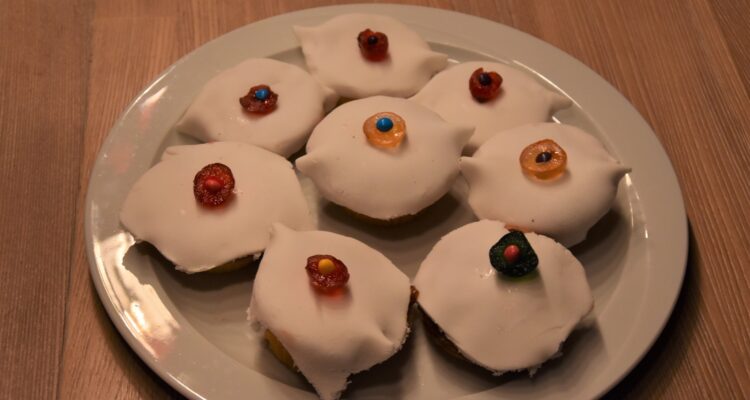 A Halloween treat that’s a bit creepy, but also fun are these Eyeballs Cupcakes. Halloween isn’t something originally celebrated in the Netherlands. Growing up I only knew Halloween from American tv-series and movies. But the last 10 years or so you see more and more events popping up around Halloween. This is also the case with Halloween treats and bakes. So each year Yuri and I bake something for Halloween. A lot of times with the help of his nieces. This year we made several things such as Graveyard Pudding Cups and Mummy Cookies. I also made Halloween Sangria for Paul and me. Next to these things we also made cupcakes with eyeballs.

The cupcakes are regular fluffy cupcakes, I will share the recipe later on the blog. The pupils are made from candied cherries and pearls. The eyes are white fondant, and the ‘glue’ is strawberry jam. This makes for a delicious, sweet combination. The recipe is from the cookbook Kindertaarten from Sara Lewis.

Another recipe prepared by Yuri is the Easy Lasagna.

I’ve made a few changes to the ingredients for the Halloween cupcakes with eyeballs. I swapped strawberry jam for apricot jam. I had an opened jar still in the fridge. The kids mostly used the red candied cherries instead of just the yellow and green ones. We didn’t use back licorice for the pupils, but pearls. Yuri is not a big fan of back licorice and I had the pearls at home. We tried to make veins on the eyes with red paste, but the paste had dried out. So no veins on the eyes for us.

Top the cupcakes with strawberry jam. Knead the fondant and roll it out in powdered sugar with a rolling pin on the kitchen counter.

Cut out 12 pieces of the fondant and place each on a cupcake. Fold it around the cupcake and squeeze it on both sides to resemble an eye.