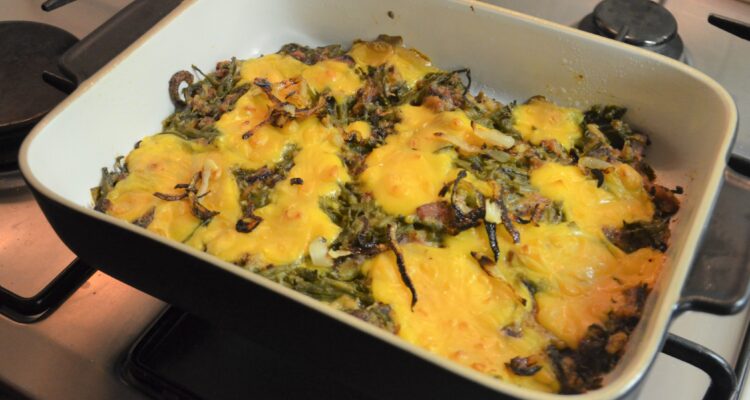 Paul, my husband, simply loves green beans, so this Green Bean Casserole with Bacon was just what he wanted. He somehow especially loves it when the green beans come from a can, instead of fresh. With every other vegetable he rather has them fresh, except green beans. So luckily for him this green bean casserole recipe with bacon asks for canned ones.

The green beans are the star of this dish, but extra flavor and a bite is added by the bacon, cheddar and an onion. The flavor is enhanced by adding garlic and pepper. Milk and flour bring the dish together. This best green bean casserole with bacon recipe is from Buns In My Oven. Who has a lot of delicious recipes on her site.

I omitted the salt, since with the bacon, the casserole already had enough salt in it for us. Also I added less ground pepper than a half teaspoon, that was enough seasoning for us. I didn’t have French fried onions, so just glazed a sliced onion. I only had 4 slices of Cheddar cheese in the fridge instead of half a cup of grated. That was enough.

Dice the onion and glaze it. Cut the cheddar.

Fry the bacon in a large skillet until crispy. Add the garlic and cook for one minute, stirring constantly.

Add the flour and whisk until smooth and creamy. Then add the milk and whisk and cook further. The mixture has to thicken to the consistency of gravy.

Drain the green beans. Add to a bowl. Add the bacon mixture, pepper and half of the onions. Stir well until combined.

Spray or grease a baking dish. Pour the green bean mixture in the baking dish, spread evenly. Sprinkle with cheddar.