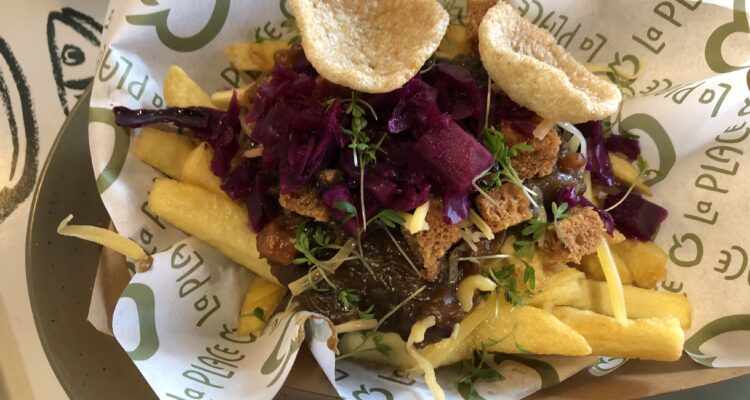 Week 39 2022 was a week with lots of cooking and baking. The week ended with a busy Saturday and a quiet Sunday.

Since I had some leftover bananas, I baked a banana bread. I used the recipe for a classic one from the cookbook Bananabread. I also prepared pumpkin puree from one of the pumpkins we picked ourselves. Paul made a stir fry dish with rice for dinner.

In the morning I cooked a spicy barbecue sauce from the cookbook Heerlijke Hamburgers from Anne Wilson. The barbecue sauce needed to rest for 2 days before using it. Yuri made lasagna Bolognese together with Paul. I baked a pumpkin bread, I used the pumpkin puree I prepared on Monday.

This morning I prepared tomato sauce from the cookbook Heerlijke Hamburgers. The tomato sauce needed to rest for a week before using it. I made another batch of pumpkin puree from the second pumpkin we picked ourselves.

I wanted fries for dinner. So Paul prepared these and chicken nuggets in our deep-fryer.

On my walk around the neighborhood I spotted the first toadstools. They were really large. Dinner was a broccoli burger with the barbecue sauce I had prepared on Tuesday.

We had a really small cheese board as an appetizer. Dinner was a spicy pumpkin soup from A Spicy Perspective, for which I had prepared pumpkin puree earlier this week. The pumpkin soup was really delicious.

We had a really busy, but fun Saturday. We started in the morning with a visit to Bakkerij de Tureluur in Almere.

Then on to Leeuwarden. It was the Weekend van de Wetenschap (Science Weekend) and lots of events here being held and companies opened their doors. Among them Grendel Games. Yuri wants to become a game developer, so seeing a game studio from the inside was what he wanted to do. He asked a lot of questions to the people working here. Afterwards we had lunch at the La Place in Leeuwarden. Yuri had loaded fries stoofvlees (stew), I had loaded fries Kharma Kabab and Paul a ham sandwich. We also ordered one piece of pumpkin pie.

From Leeuwarden we drove to Nijkerk to visit Paul’s parents. After our visit on our way home we stopped in Amersfoort for dinner at McDonald’s and KFC.

In the evening Paul and I went to a birthday party of a friend in Beek-Ubbergen.

Since our Saturday was so full we stayed home on Sunday. Dinner were green beans with pasta, vegetarian chicken pieces and barbecue sauce. Paul prepared it for us.

So that was a week with a lot of cooking and baking.