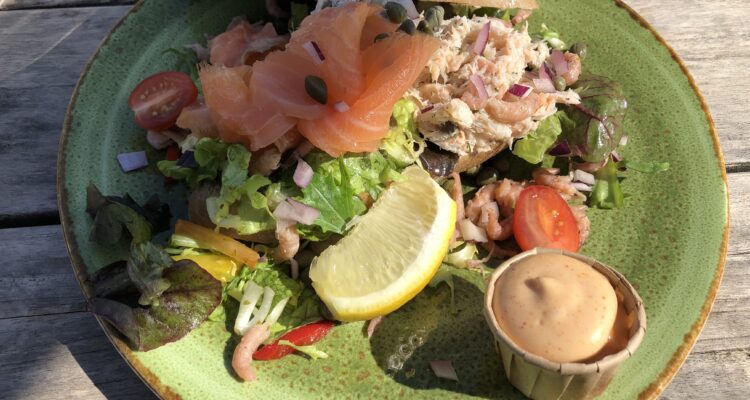 Week 13 2022 started with a bit of sunny weather, but the temperature dropped below zero (Celsius) fast during the week. We even had some snow. Luckily we had some sun again in the weekend, although it was still cold.

Yuri woke up with a fever, he was sick with the flu. So lots of water for him. It would be the last day with sun and warmer weather, so Paul and I went to Vroeg for a coffee and ice tea on the terrace. A short visit, since Yuri was sick at home. That evening we had mashed potatoes with green beans and a vega satay schnitzel for dinner. After dinner I prepared a Mega White Chocolate Cookie with Confectioner’s Cream and Fruit. It’s delicious and the recipe will be on the blog later this week.

So Yuri was even sicker compared to Monday, he had a high fever in the morning. He slept most of the day. That evening we had vegetarian fried rice for dinner. After dinner I prepared three sweet dishes for the next day. They had to be gluten free, so I made Avocado Brownies, Sicilian Orange Cakes and Meringues. All turned out well.

My sister and I organized a high tea for our aunt at our parents. I brought the cakes and cookies, my sister the savory dishes. It was all delicious and we had a good time. In the evening both Paul and I didn’t feel like cooking, so we ordered BurgerMe.

We woke up to a small layer of snow, which quickly disappeared in the morning. Dinner was a Ham-Pineapple Burger.

On Friday there was an even thicker layer of snow in the morning, but as good as gone at the end of the afternoon. We had Eggcurry with Tumeric for dinner, which was delicious.

For breakfast Paul made an omelet mushrooms for me, an omelet ham & tomato for Yuri and an omelet cheese for himself. Paul and I went to The Amsterdam Coffee Festival. It was fun, Paul tasted several different coffees. They also had a few tea tastings and chocolate. When we had tasted enough coffee we had apple pie on the terrace of Het Papeneiland. Nice, but not as good as the one from Café Winkel 43. For dinner I made us snacks and fries.

In the afternoon Paul and I drove The Flower Route. We had lunch at Strandhuys in Katwijk aan Zee sitting in the sun. I had the fish trio on bread and Paul a twaalf-uurtje. For dinner I made mashed potatoes, cole slaw and vegetarian spinach-cheese filets.

Published no new blogs this week.