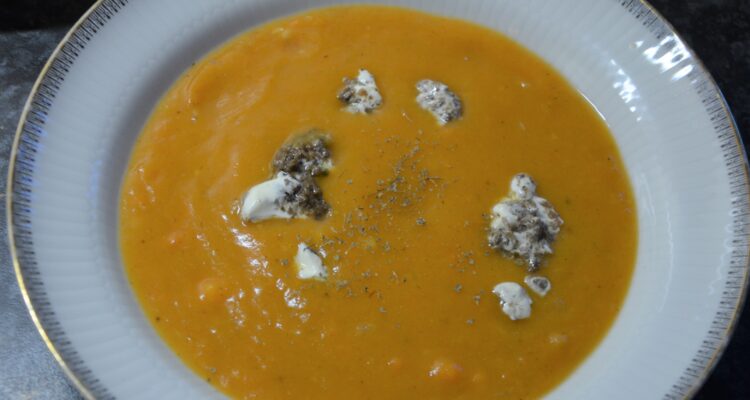 Sour cream vs crème fraîche, both are used a lot and seem interchangeable. But are they actually and what’s the difference between them? I was curious and went searching for answers. Here’s what I found.

Sour Cream vs Crème Fraîche: How Are They Made?

Sour cream or crème fraîche are made by adding lactid acid culture to (pasteurized) cream (or milk). The difference is that sour cream will be left to ferment longer than crème fraîche.

The Difference Between the Two

So one difference is that sour cream is left to ferment longer than its counterpart.

Next to this sour cream has more protein than crème fraîche. Because it contains less fat and more protein, simmering or boiling it will result in curdling.

Another difference is that sour cream usually contains ingredients like gelatin, rennin and vegetable enzymes. This is to stabilize and thicken it.

So is sour cream crème fraîche? No, it’s not the same, both are cultured creams, but there are differences. Crème fraîche is thicker, has a nutty, tangy and richer flavor. Sour cream tastes tangyer and has a more savory note. Sour cream is more acidic than crème fraîche, this acidity weakens gluten structures. This will keep bread or a dessert moist.

A Bit of History

Crème fraîche originates from France, its literal translation is “fresh cream”. Traditionally it was made from unpasteurized cream that already contained the right bacteria for thickening.

Sour cream on the other hand has its origins in Eastern Europe. It was made from cream that had gone sour due to the presence of lactic acid-producing bacteria. People liked the custard-like texture from the cream.

How to Use Them

Crème fraîche is perfect for using in sauces or soups, such as a Homemade Tomato Soup with Crème Fraîche Miter. Sour cream is suited for cold uses, but so is crème fraîche, when using as a topping or in a salad, it all depends on if you want the richness of crème fraîche or the tagines of sour cream. So can I use sour cream instead of crème fraîche? In uncooked preparations it’s a matter of flavor, what you like best. When using it during cooking than you exactly can’t because of curdling.

Sour cream is perfect to add once you’ve cooked it and it’s off the heat. Or in baked goods, such as cakes and muffins, since it keeps it moist. It’s also perfect as a condiment with nachos, tacos, burritos, chili and blinis.

Crème fraîche is perfect in casseroles, such as this Creamy Gnocchi Recipe with Dolcelatte Figs, soups, sauces, stews and scrambled eggs. Since the flavor is creamier and milder it’s also perfect whipped with sugar and vanilla. Serve it with scones, fruit and other desserts. Or blend it with herbs and/or citrus to use as a topping on say meat.

Curdling is the separation of the solid and fluid parts of the sour cream because of the heat in the dish. The fat slowly breaks apart and starts to drift on top of the sauce or soup. This doesn’t look flavorful, nor has a good taste.

Now you know the difference and when best to use which one. When you want to know more about mayonnaise, read about how I tried out different mayonnaise recipes.