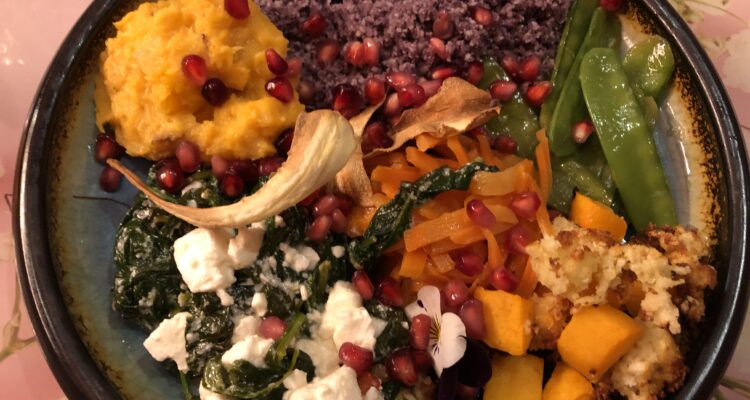 Week 47 2022 was special since my sister got married and it was Paul and mine’s wedding anniversary.

We had endive stamppot with a vegetarian satay schnitzel. During the day there was some sunshine, despite it being cold.

Yuri prepared dinner and he made us spaghetti carbonara. It was delicious.

I made Mexican seasoning mix from the website Lekker en Simpel. It was needed for dinner. Dinner was namely Mexican cheese fingers with tomato salsa from the cookbook Van Piepers tot Pasta from Blue Band. I served it with small potatoes and carrots.

We celebrated Sinterklaas early together with a friend. We did gourmetten (sort of raclette) and there was a chocolate letter for everyone.

My sister got married on this day! She had a beautiful wedding dress, the groom looked good too and so did their 2 daughters. It was a joyous day. The wedding ceremony was in the afternoon in Uden. Afterwards we had dinner at Smullen in Boekel. It started with kroepoek and satay sauce. Then we could choose between a trio of fish or a trio of meat. Yuri, Paul and I had the trio of meat. It was delicious. As a main you could choose between fish, meat or vega. Paul had the fish, I had vega and Yuri had the meat. The dessert was cheesecake with fairy floss, chocolate cake, chocolate sauce, passion fruit and macarons. We stayed in Uden the whole weekend and checked in at Fletcher Hotel-Restaurant De Teugel Uden-Veghel.

Our 18th Wedding anniversary! We started the day with the breakfast buffet at the hotel. Then we had a lazy day at the hotel, with reading, watching some Netflix and gaming for Yuri. In the afternoon we had lunch at the restaurant of the hotel. I had a club sandwich and Paul a uitsmijter. We did some reading in the afternoon and shared a Limencello Spritz. We also had dinner at the hotel. Paul and Yuri had the ribs & wings, while I had a mushroom pie. Yuri and I had hemelse modder (heavenly mud) as a dessert and Paul a cheese plate. After dinner I had a chai latte and Paul a stroopwafel latte macchiato.

Yuri and I went to the McDonald’s and got our breakfast there. We checked out at the beginning of the afternoon and dropped off some of our stuff at my parents. Yuri decided to have lunch with his grandparents. Paul and I had lunch with a friend in Uden. Our lunch was at Brasserie De Baron. We all had sliders and Paul and our friend also had creamy onion soup. We then had a warm drink, I had a hot choc with marshmallows, Paul a caramel latte and our friend a Baileys coffee. Then they both had a ginger tea and I an ice tea. I gave a homemade tea advent calendar to my friend. She loves tea.

At the end of the afternoon we had dinner at my parents with mushroom soup and buns with knakworstjes (Frankfurters). In the evening I finished the tea advents calendar for my sister-in-law and mother-in-law.