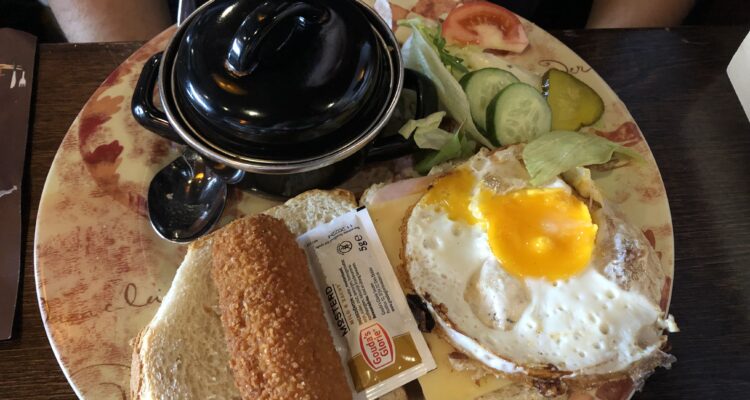 We were on a road trip in the Netherlands almost the whole week 17 of 2022. It was fun and we had lots of delicious food. We had no homecooked meals for the entire week.

We had arrived at our hotel in Hilversum the day before. In the morning we enjoyed the breakfast buffet at the hotel. Paul and I drove part of the ANWB Zeebodemroute in the province of Flevoland. This time of year tulip fields abound in Flevoland. We had lunch at Danny’s Marknesse with a Schnitzel plate and a Spicy Chicken Pieces plate. At Fishrestaurant De Kaap in Urk we shared a plate of kibbeling. Which isn’t the only Dutch Traditional Food we had during our vacation.

When we were back at the hotel we had a bittergarnituur at the RIVA wine lounge. Bittergarnituur was included in each of our hotel stays at Fletcher, just like the breakfast buffet every day and a 2-course dinner at the day of arrival. We had dinner with salads we bought at a grocery store.

We started the day with the breakfast buffet at the hotel. Then it was time to move on! With a few stops we drove to our hotel in Leeuwarden. First stop was Fruitbedrijf Smits in Zeewolde for some fruit and veggies. Then we stopped for lunch at Boerkok in Lelystad. We love their fries. Both these places we discovered on the Tulip Route Flevoland in week 15 2021 and week 16 2021.

After lunch we visited Museum Schokland, we ended our visit to the museum with a delicious chai tea latte for me, koffie op z’n Hollands for Paul, a drink for Yuri and shared a Schokkerbrok (a piece of crumble cake). Our last stop was in Giethoorn. Yuri and I made a stroll here, while Paul had coffee in a restaurant.

In our hotel in Leeuwarden we had a 2-course dinner at restaurant DuCo. We all had the Pork Roast as an entrée. As the main Paul and Yuri had the Ribs & Wings and I had the Flame Grilled Chicken Burger. After dinner I had a Limoncello Spritz, which I loved.

It was Kingsday, a national holiday. This year we celebrated it in Leeuwarden. Yuri and I already strolled around on the vrijmarkt before breakfast. We enjoyed the breakfast buffet at the hotel and then all 3 of us strolled around the vrijmarkt. Lunch was a bittergarnituur, uitsmijter and kroketten with bread.

At the end of the afternoon Paul and I sat on a terrace watching people celebrating Kingsday (and getting drunk). Dinner was a sub from Subway.

We ended our stay in Leeuwarden with the breakfast buffet at our hotel. Afterwards we drove to Franeker and visited the Eise Eisinga Planetarium. Across the street was pastry shop De Korenbloem & Schaafsma. We had a marzipan, Christoffel and chocolate cake with something to drink here. We also bought bonbons in the shape of planets. It was all delicious!

At our hotel we had a 2-course dinner. Paul had lamb, I the satay plate and Yuri the guinea fowl. As a dessert Paul had a cheese plate, Yuri the dame blanche and I had the tasting plate.

Started the day with breakfast buffet at the hotel. Paul and I drove the ANWB Dijk en Duin route, with lots of tulip fields in this time of the year. We had lunch in Callantsoog at Brasserie de Foyer with bread with smoked salmon and bread with ham. The food was delicious, but the service wasn’t that great.

At the Polderij in Anna Paulowna we had mango cake and apple pie with tea and coffee. At the hotel we had bittergarnituur and a deluxe borrelplank for dinner.

The last day of our road trip started with breakfast buffet at the hotel. We then visited the National Cheese museum in Alkmaar. It was a fun, really touristy museum. We had something to drink on the square in front of the museum afterwards.

Then we paid a short visit to Bram & Aagje in Graft, the smallest candy store in the Netherlands. We bought a bag of banana candies. From Graft we drove to Volendam, admired the harbor and had lunch at De Vrijheid. Paul had a twaalf-uurtje, Yuri an uitsmijter with ham and cheese and I had a kibbeling plate.

On our way home we had hot cocoa and tea at Ottenhome. For dinner we had a salami-cheese-onion pancake and a pizza calzone with shawarma.

I needed new sandals and new trousers for Yuri so we went to the city center in Utrecht. We tried out a new pastry shop. Paul had a blueberry cake and I a chocolate mousse cake with a chai latte at Carla’s Conditorie. We took home Chinese take out from Amazing Oriental at Hoog Catherijne for dinner.

We had a great road trip and Yuri still has a week of vacation left.